Have you tried these? Special K Flatbread Breakfast Sandwiches

In the past, I've talked about my need to eat a high-protein breakfast. Ever since I was a kid, I've known that high-carb breakfasts do nothing to curb my appetite or leave me satisfied. For me, cereal, pancakes, or a bagel does nothing. I often refer to high-carb breakfasts as the "anti-breakfast" because they leave me feeling hungry, often hungrier than I was before I ate. So, instead, I'm a hearty breakfast kind of girl-- eggs and toast, or my favorite, a breakfast sandwich.

When I first started losing weight, I ate low fat ham, egg beaters, and Weight Watcher's cheese on a light whole grain English muffin almost every morning. Now, I can only dream of having that kind of time in the mornings. I'm not sure I could wake up any sooner to prepare such an elaborate meal-- I mean, does my alarm clock even have the ability to work earlier than 6 AM? Hell, I'm lucky if I get the chance to make a protein shake for my long drive to work. Often, I end up eating some low-sugar oatmeal at the office (yup, all carbs) or woofing down a granola bar before court (again, all carbs).

Well, the other day, I picked up a box of Special K's new Flatbread Breakfast Sandwiches from the frozen food section. These new breakfast sandwiches are part of Special K "Protein Effect" line. Let's just say, I hope Costco starts carrying them because I would not mind eating one of these sandwiches every morning. They only take just over a minute to heat in the microwave, so they are great for my morning routine. They taste a lot like the Dunkin' Donuts egg white flatbread sandwiches. The box boasts a multigrain flatbread with real eggs (and apparently the egg and cheese variety apparently has real tomatoes... woot?). I love the fluffy scrambled egg and spicy pepper jack cheese. I love that the bread doesn't get hard and chewy in the microwave. I especially love that these sandwiches only range from 4-6 WW Points+.  Special K makes three varieties:  1)   eggs with vegetables and pepper jack cheese; 2) ham, egg, and pepper jack cheese (the one I bought); and 3) sausage, egg, and cheese. I can guarantee you that I will be trying all three varieties. I can have a breakfast sandwich with sausage for only 6 WW points+?! Special K, I think I love you.
Posted by Kacie B. at 8:43 PM 1 comment:

As it turns out, last week was a mess. I couldn't workout post-op (something about blood pressure increasing bleeding? Gross.). I couldn't cook, so I had to depend on Dan to feed me (read: canned soup or takeout). I finally had to drag myself out of the house on Friday to go to court so of course I treated myself to lunch (French onion soup, barbecue chicken pizza, and a beer) since I finally got to eat my first meal of the day at 4:30 pm. On Saturday, I ate a burrito for breakfast, helped a friend move, got overly hungry, ate a slice of tomato pie as a "snack," then an egg roll and a Cuban sandwich (bad idea for the mouth). I remember sadly thinking to myself, "Have I eaten a fruit or vegetable all day?" Oh yes, and there were Oreos, but they were reduced fat-- because that totally makes it better. By Sunday, my body had grown accustomed to my terrible eating habits once again, and I convinced Dan that I NEEDED that Spicy McChicken sandwich I had been craving-- of course we had to share a small fry. There was Christmas decoration shopping and fried macaroni and cheese balls from the Cheesecake Factory (surprisingly, two of those filled me so much I had to resist the cake I contemplated from the start).  Finally, I topped it all off with a cheap, dry pecan roll topped with cinnamon ice cream. Don't judge me. 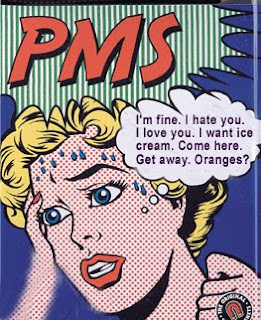 Just before I stepped on the scale this morning, I was not-so- surprised by a "visitor." It helps explain the cravings... and the mood swings... and the weight gain. I guess next week we will find out just how much I can blame on PMS. Until then, suffice it to know that I whined myself out of cooking the healthy dinner I planned for tonight and into getting Chinese food instead. I didn't even opt for the boring steamed selection or brown rice. Fortunately, I was still able to stay within my daily points allowance. 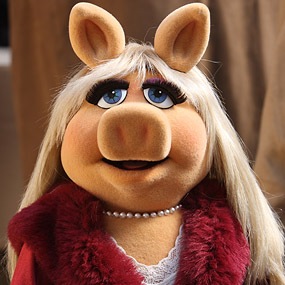 On Tuesday, I had my impacted wisdom teeth removed. The first night after the surgery, I accidentally caught a glimpse in the mirror, and I was amazed at how the swollen side looked so different from my other side. It was as if I was looking at the old me (pre-weight loss) and my current self at the same time. In comparing the sides, I discovered smile lines, creases, and definitions in my jaw that I had never noticed before. My swollen side reminds me a bit of Miss Piggy with the round, puffy cheek. If only I had her style.

I can't wait until I feel like myself again. All this medicine has me feeling dazed yet still limited. I've been flooding my body with non-stop medicines between the antibiotics to fight infection, steroids for swelling, and medicine for the pain on top of my usual medicines. I'm shocked that all these drugs haven't managed to eat a whole in my stomach-- especially since I haven't been putting much into it. So far, I have eaten a lot of soup: chicken and stars, cream of broccoli, and matzo ball. Unfortunately, while I sit home recovering, I crave foods I see on TV:  a Thanksgiving sandwich with all the fixings on a roll, pizza, cake, and the list grows the longer I can't eat solid food. Yesterday, I really wanted a Thanksgiving sandwich. Who am I kidding? I can't even open my mouth more than an inch, let alone eat a sandwich! Dan brought me home a turkey dinner from a local diner with a piece of lemon cream cake. I was grateful for the treat, but after looking up the points, I really wish he hadn't. A single piece of cake packs 15 WW Points. So, I limited myself to only 1/3 of the slice and saved the rest for later.

Lunch today  seems like a good time to eat the other 2/3 of the cake, right? That's right-- I just ate cake for lunch and feel so guilty. I swear, anyone else would lose weight while on a soft food diet. Not me! I'm sitting here eating creamy soup, mashed potatoes, and cake! To make myself feel better, I followed the cake with a bit of soup and a handful of cherry tomatoes. Still! Looks like my eating habits are starting to fit my new puffy face.
Posted by Kacie B. at 2:59 PM No comments: